LOCAL TAXES in Finland vs. USA

MUNICIPALITIES DO NOT COMPETE ON TAXES in Finland

In Finland we have not really local taxes in the same meaning than in USA. Sure, we have 295 municipalities which have right  to collect income taxes, yes, but only income taxes based on salaries, wages, pensions, taxable social benefits. They have almost the same rate of tax, about 20 per cent. So the municipalities do not compete on taxes.

Every municipality must collect taxes, because the state (In Finland, only two administration levels to taxation: local municipalities, state) determines so many duties to them. The main function is to organize social and health care.  It takes about half of all income of municipalities, the state helps with central governments transfers (about 20 % of  costs).

If the resident (or local company) have real estate in the municipality so they must pay tax. The rate of tax is about 1-2 % of the latest taxable value in every city. Also the apartments are taxed at the same rate. The owner of the apartment pays the tax.

The third and the last way to get tax income in municipalities is based on the taxation of gains of local companies. The system is so that the state collect it and deliver it to the municipalities and determine the share ratio: about 70 % state/ 30 % municipalities, 2019 

The system is simply and cheap to local governments. The state organize by legislation the whole system, collect and passes on local taxes to each municipalicity monthly. It is also a benefit to citizens that they have almost the same level of taxation (local + state) in everywhere in the country. The biggiest cities (capital city Helsinki, Espoo, Turku) have a little bit lower level of local income taxation, but the housing is very expensive comparing to smaller cities and areas.

Also VAT (value-added-taxes) are on the same level (24 % of prices of goods and services) everywhere in Finland (almost the whole Europe has same levels and system) – but the whole revenue of VAT and other indirect taxes (fuels, alcohol) are collected to the state. .

In USA they have three (or four) levels of taxation: (school) districts, local governments, states, federal administration. Local authorities can levy both income taxes and indirect taxes – real estate taxes too. The rates of all taxes are quite low, OK, but they differs so much everywhere that it is a great work to administrate them to governments. The citizens have also find out many details of system when they are going to exchange the residence.

The areas have a real self-government in USA on the contrary in Finland. In Finland municipalities have only a formal right to determine the level of local income tax. As above is said the state assigns so many responsibilities to municipalities that the variation of the rates is quite narrow. The responsibilities (health-care, base-education, traffic) are so expensive everywhere. 

We have old-fashioned winter now: snow, snow and -10 Celsius (14 Fahrenheit) in Southern Finland. In Lapland (in Northern Finland) they have had -30 Celsius or more (-22 Fahrenheit).

In April 14th 2019 we have the Parliamentary Elections.

The candidates have not yet discussed of taxation and its principles. The only “new” theme for 20 years is to make the rates of wage-taxation lower.

The local taxation is not discussed and the fact that other taxes which must be higher if we are making wage-taxation lower all the time.

The candidates discuss of health care and immigration which seems to be important, necessary but problematic to us now.

The wage earners vs. pension income – tax rates in Finland

In Finland funded by taxes

In Finland you do not have to worry about your pension if you get regularly wage income. Your employer withholds among other taxes and contributions about 5-7 percent to Tax Administration and then to special companies to save them for you later pension (and to invest).

The pension contributes are obligatory by law but if you think your future pension income is not enough to you, you can have private insurances. 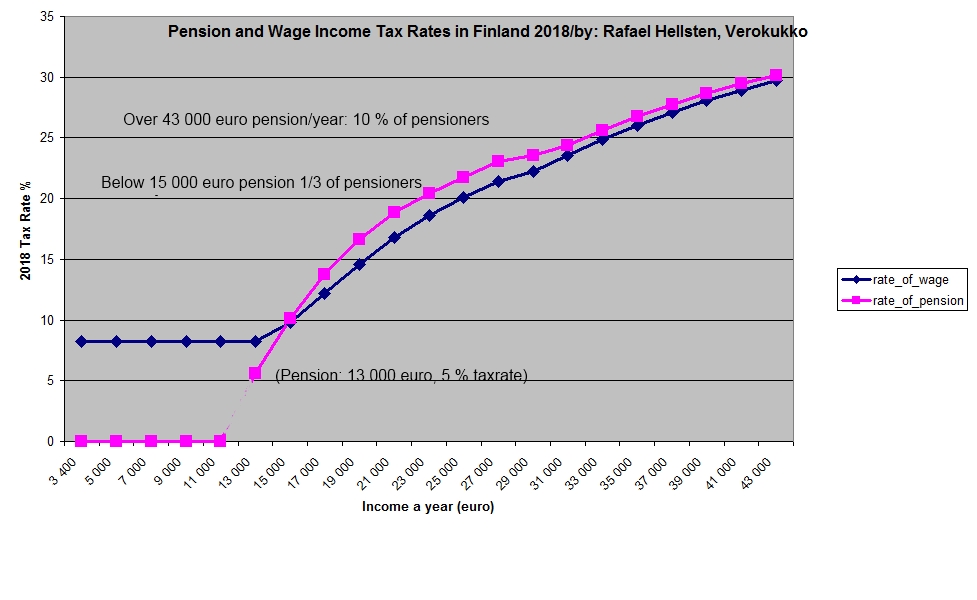 Tax Rates of Wages vs. Pensions 2018 in Finland

THE TAXES ARE AT THE SAME LEVEL

Pensions are taxable income and the tax rates are very close to the ones of wages. These tax rates  are not discussed as often as the general level of the real pension income. Is it correct to tax pensions? In some way they are taxed once before, this is the same argument that the inheritance tax is said not to be just (to them who inherits).

Evidently the only fair point is the tax rate below pensions 15 000 euro/year = 1 250 euro/month. The pension income is tax-free to 11 000 euro and after that 5 – 10 %. About one third of pensioners have income below point 15 000 euro/year. Is it enough to living – it is enough in Finland if you have an own apartment. The housing allowance also helps a little)

TO PLAN THE TAXATION OF NEXT YEAR

Now (August 2018) the Finnish Government is planning (or try to reach consensus) the tax rates of the year 2019. The main point in public is the taxation of the wages.

Unemployment benefits and pensions are also taxable but with different rates

Test the exact total income sum of 55 000 euros/year ( 4 600/month) and compare the tax rates of wages and pensions, what do you notice? 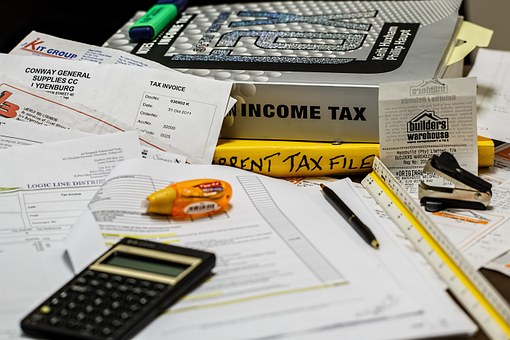 In Finland funded by taxes

In Finland you get all back for your taxes

The graphs and tables are counted and drawn by Excel VBA and finished with Paint.NET. The formulas used are derived Finnish Income Tax Act (1553/1992) 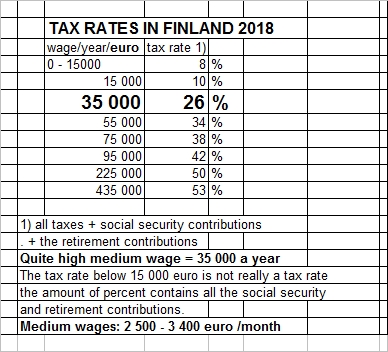 The lowest line (blue) represents all kind of obligatory (Social Security …) contributions you have to pay. They are paid for your pension and for the situations of sick leaves and for sickness & unemployment benefits. In Finland you get pension without you your own agreements with your employer or a private company.

Finland state with Tax Administration collects these premiums, but the real system is so that you employer withholds these directly and automatically before paying wages to you (usual withholding system).

Is it a good pension which your get? That is the good question, but if it is not obligatory you may not take care of it during working years. The retirement and other contributions are about 10 percent of the total earned wage (no deductions or other reliefs). Of course you can also save extra money to your pension with different kind of systems and get some tax-reliefs. Any way even the lowest wages (from 1 euro up) must pay all the contributions.

The red line (the second) represents local taxes. Local (city) income taxes are collected at the same time as other income taxes. In practice it does not vary much between the cities. If your income per year is about 16 000 or more you have to pay local taxes. Almost everywhere in Finland your have a short distance to a good local public basic school which is only partly funded by your local taxes. The rest of funding comes by other taxes and it is in almost same level everywhere.

We have no private schools except some special schools, which are religious or have some special ideology of the education

After the wage income 16 000 a year you pay local tax a little. The tax rate increases very quickly. The last value of local tax rate is about 17 %. at the point of 46 000 euro/year. After that the local tax has no progression .

WHAT DO YOU GET – THE BENEFIT OF HIGH TAX RATES

The income tax rates of the wage-earners are quite high in Finland, but what your receive back for the money you pay? The whole education system is funded by taxes and you have not to begin save money, when you get children. The universities are not like Harvard, but we have to exchange knowledge and learn (and we learn) language. The universities are in good average level in Europe and in the whole world.

… is almost totally funded by taxes. The customers have to pay little contributions (10 –100 euro) of every visit to a doctor. We have also a quite small private sector, but it is a good competitor to a public sector. It is not too expensive in easy cases and you get help almost immediately. You must queue a little to public sector services.

The yellow line (the highest) represents taxes you pay to the state (like Federal Income Tax in USA). The real tax duty to state tax begins from 36 000 euro/year. The scale of it is progressive, the total maximum tax rate is below 50%. In the table there is a wage of amount 435 000 euro / year (53 % tax rate), but we have about 400 (four hundred) wage-earnes on this level. The number of wage earners (even the smallest) is about 2,4 million. The richest people in Finland do not primarily earn wages; they have capital income(s) with tax rate 34 per cent (no progression).

********************
BY THE WAY:
We do not pay taxes according our marriage status only according income level (and a few natural deductions) – if we have children (under 17 age) we have no reliefs in taxation but we get social benefits.

a book which compares USA and Finland systems (not detailed tax information, but opinions to think):  Anu Partanen: Nordic theory of everything

In Finland we count days (nights) to Christmas Eve – it is a holiday for most until Boxing Day and we all hope snow – a White Christmas – let’s see. 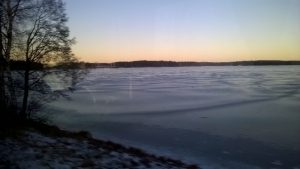 The Lake Vanaja is already frozen (iced), 10th of December, 2016, near city of Tampere, at three o’clock pm, the Sun has already set 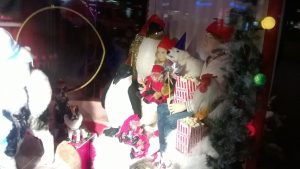 The Chrismas-window in the city of Tampere, Christmas elfs (helpers of Santa Claus), Christmas Tree … 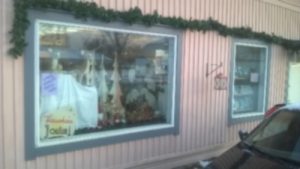 The Christmas-window the small village of Iittala (the world-wide known glass-factory lies there), reindeers, trees.. and the paper Hauskaa Joulua = Merry Christmas 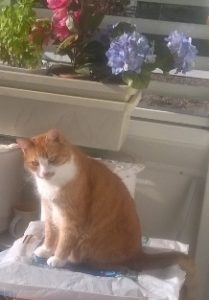 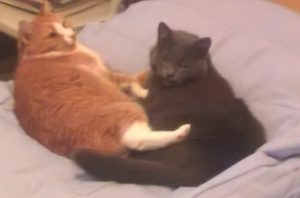 ALL THE EXPENSES TO THE GRADUATED STUDENTS: 140 000 EUR ONE REASON TO COLLECT TAXES

The expenses of one student in the Finnish university

How can you pay back?

But what do you get after examination, do you get work? The society have invested to you, OK, but how can you pay back if you don’t have a workplace?

The elementary school (the primary school) and the upper secondary education (high schools, “lukio”) expenses are on the average 100 000 euros per one student; also the total costs to ages from 7 to 19, together 12 years.

THE EQUAL OPPORTUNITIES: The main objective of Finnish education policy is to offer all citizens equal opportunities to receive education.

(Finnish National Board of Education) 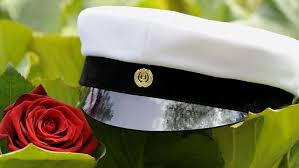 Finnish student cap and the rose -after 12 years, and a very traditional celebration at the end of May,

and after that every first of May, great, great carneval !!! I celebrate every year in Turku, the former capital of Finland and my first city to study after base education

Glorious, Great and Happy Indepence day to all of us – and thanks for the earlier generations, one year and then the 100th Anniversary Day 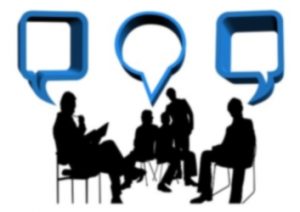 The citizens also should have a simplified economic model to use: the quality of conservation would rise

But why the Ministry is using the model alone? It would be interesting to have a simplified model to everyone – the quality of economic conversation would rise.